Top down or bottom up? 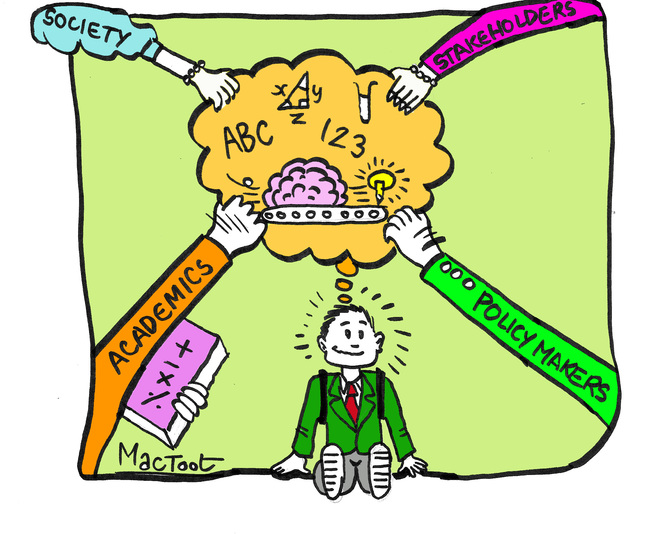 Thats’s the million dollar question for reform, in my opinion anyway. I am coming up to the end of the semester for a course I am co-teaching about education and reform in Egypt. As with any new course I teach, I find myself reflecting … a lot.

One of the dimensions we tried to cover in class was the role of other active participants in the education ecosystem, the civil society, the corporates, the entrepreneurs for example. Which perpetuated the question of impact, where was it?

If the national strategies; compiled through think tanks of academics, practitioners, policy makers and stakeholders, are saying all the right things. The practitioners; through individual stories and personal achievements, negate the notion that they are a stereotype of negligence, inefficiency and rigidity. The civil society, in large numbers, take on individual success stories that claim to have impact. The NGOs document and report on successful reform efforts and pilot projects, which disappear into the oblivion a few years down the line. Where is the impact? Where in the hierarchal structure of education is the malfunction? Where is it going wrong?

Those have been the types of questions flying around my classroom the past few weeks and to say the least, they’ve left me head scratching. I’ve been left pondering a few questions, which will undoubtedly be a driver for my research in the years to come.

Where in the educational ecosystem does it all go wrong? If identified, can it be fixed?

Why do reform efforts or initiatives have lack sustainable impact?

I will be writing about each of those topics in weeks to come, but I wanted this post to help generate online discussions to enrich the posts to come.

Can fixing education save the world?

The Value of Education: The View of a Devil’s Advocate My passion for educational development and education in general is fueled by living in a country like Egypt, especially over a significant period like the past four years have been.... Continue →