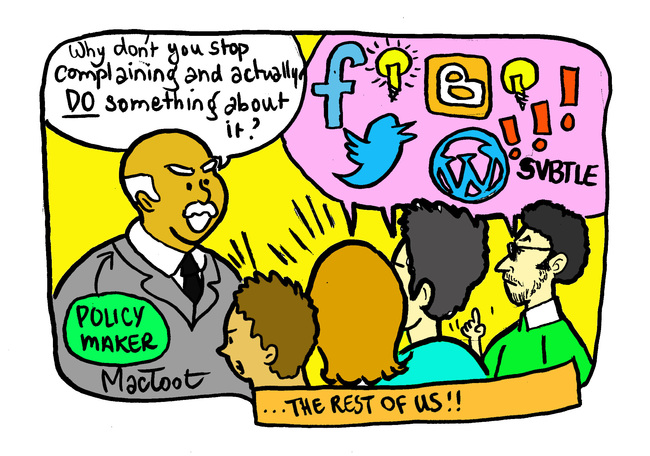 While I am regularly vocal about my vision for reform in Egypt, in the sense that I firmly believe a revolutionary change has to take place for the educational system to be truly reformed. This, in contrast to the norm of systematic bottom-up or top-down approaches - both which seem to get lost or diluted along the way. I even use a little joke to describe this to my class – the elevator is always broken (it never seems to reach where its supposed to). I have to be explicit here and clarify that when I say revolutionary change here, I mean change that stems from necessity, one that requires brave and crude decisions, which may not initially be popular with the masses. I do not mean a change of regime or change of system. I know this maybe obvious to some readers but in the current climate in Egypt, this type of terminology is thrown around haphazardly and at times is infuriating that people still think that changing one man or one government will bring about true change.

That being said, I realize that I’m not likely to be able to change the system here single handedly, nor with a small group of colleagues. I also had to come to the realization there are plenty of existing efforts, most with good intentions and the good of the community at heart. Nonetheless, the majority of those are still individualistic to a certain extent; their reach or impact is not sustainable. Meeting some of these individuals over the past couple of years has been inspiring to me as it helped me realize that working the system can still have an impact. It may not be as revolutionary but it’s definitely a step in the right direction.

My brief, albeit enlightening experience working with policy makers over the past few years helped me comprehend the phrase “social media attitude”. A phrase that has been trending with the policy-making community over the past few years. A large number of policy level governmental individuals overuse the phrase “why don’t you stop complaining and actually do something about it?” This statement is quickly becoming a standardized response to anyone who is anyone who is questioning the status quo or the dilemma that is educational policy. Don’t get me wrong, sometimes it is incredibly frustrating to be on the policy making side of the fence; there are endless factors to consider and realities that idealists refuse to acknowledge, that makes the process extremely complex. On the other hand, no one has forced you to be a policy maker and your stance should not be "that it’s just a job” or that “no one is to disturb you while you’re doing it”. It is not reasonable to assume that policy makers will sit and listen to all those with concerns at anytime at any place, the logistical realities of that alone make it impossible. It is also unreasonable to assume that the community, civil society, entrepreneurs, academics and many other stakeholders have nothing to contribute. Even if the contributions are negative or critical, can’t these help inform future decisions? Are they not forms of feedback on the current situation? May they not open up possibilities for other directions or solutions? I think policy makers need to understand that like Rock stars and Footballers, they will be critically scrutinized whether correctly or unjustifiably, as they are the ones in the spotlight, but this should not desensitize them to constructive criticism or potential solutions.

Since most of these talks, in my own experience, ended with “why don’t you send us your suggestions” and then resulted in nothing (normally due to a lack of channels for communication) I have decided to start posting all my suggestions and potential solutions on my blog. I thought I would focus on an idea or suggestion or criticism per post, that way I can receive feedback from the community. The suggestions will be out in the public, so anyone wanting to further develop those ideas, test them, research them, collaborate on them would be free to do so My goal as I hope your is for reform rather than personal glory, right? Finally, the policy makers can stop ending our conversations with that tedious statement; instead I can direct them to these posts before/after we actually meet. Maybe then they would would be inclined to take some of these on board and find the political braveness to allow them to implement them.

I recently attended an EduCause workshop on instructional design and several of the speakers were discussing current and emerging trends, as well as, some of their success stories. One of the speakers was talking about a continuum of... Continue →